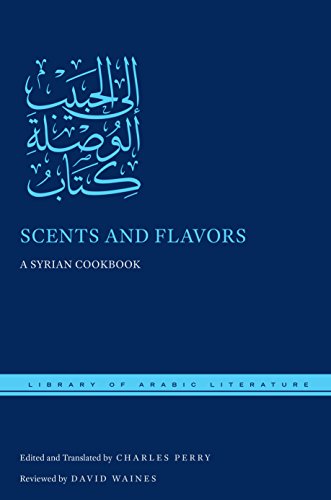 Scents and Flavors: A Syrian Cookbook (Library of Arabic Literature 47)

Collecting 635 meticulous recipes, Scents and Flavors invites us to savor an inventive cuisine that elevates simple ingredients by combining the sundry aromas of herbs, spices, fruits, and flower essences.

This popular thirteenth-century Syrian cookbook is an ode to what its anonymous author calls the “greater part of the pleasure of this life,” namely the consumption of food and drink, as well as the fragrances that garnish the meals and the diners who enjoy them.

Organized like a meal, it opens with appetizers and juices and proceeds through main courses, side dishes, and desserts, including such confections as candies based on the higher densities of sugar syrup—an innovation unique to the medieval Arab world. Apricot beverages, stuffed eggplant, pistachio chicken, coriander stew, melon crepes, and almond pudding are seasoned with nutmeg, rose, cloves, saffron, and the occasional rare ingredient like ambergris to delight and surprise the banqueter. Bookended by chapters on preparatory perfumes, incenses, medicinal oils, antiperspirant powders, and after-meal hand soaps, this comprehensive culinary journey is a feast for all the senses.

With the exception of four extant Babylonian and Roman specimens, cookbooks did not appear on the world literary scene until Arabic speakers began compiling their recipe collections in the tenth century, peaking in popularity in the thirteenth century. Scents and Flavors quickly became a bestseller during this golden age of cookbooks, and remains today a delectable read for epicures and cultural historians alike.

There are no reviews yet.

Be the first to review “Scents and Flavors: A Syrian Cookbook (Library of Arabic Literature 47)” Cancel reply