As you may have noticed from my first blog post, tea holds a special place in my heart and I especially like tea blends by Shanti Tea; something about their tea just wakes up so many dormant memories. One of their blends that had recently captured my attention was the “Banana Chocolate Latte”. I know!! It sounds like a weird tea flavor but trust when I say it smells heavenly. It was a smell that immediately took me back to when my sister used to take me out to Ben & Jerry’s on Bliss st. in Beirut.

I still remember so vividly the smells, flavors and even the summer breeze that sent shivers down my spine as I held onto my gigantic cup of their Cherry Garcia with a brownie, fudge and gummy bears!

My sister always ordered a banana split and only ever offered me one bite (even though my brownie was fair game…the downfall of being the baby sister!) It’s rather funny that years later I call her Banana as a spin off to her nickname Nana; HOLY GUACAMOLE GUYS!!!! I JUST FIGURED OUT WHY I CALL HER BANANA!!!!! (The subconscious works in mysterious ways!)

So to pay homage to those Ben & Jerry’s late night outings, I decided to use Shanti Tea’s “Banana Chocolate Latte” tea to create a recipe that would blend the flavors and memories that my sister and I shared eons ago. Ladies and Gents, I present to you my Banana Chocolate Latte Cheesecake (with a brownie base for good measure). If you make this cheesecake and chill it in the freezer for a little while, it tastes just like an epic old school banana split! You will not be disappointed.

And as for you Banana, thank you for those Ben & Jerry’s moments xoxo 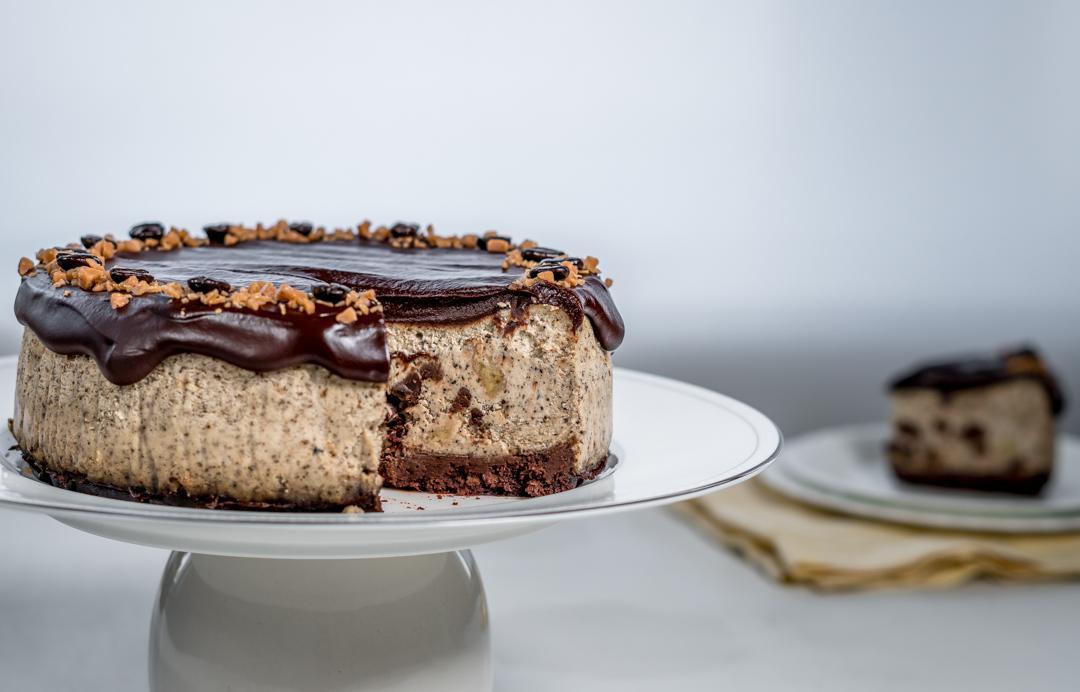 The best way to go about this is to have your cream cheese and eggs at room temperature. Cream the cheese in a mixing bowl with the paddle attachment until smooth and creamy. Add the ½ cup of sugar and mix until well incorporated. Add the eggs one at a time and let them incorporate fully (make sure the first egg is fully mixed in before adding the second!!)

Now for the flavoring part, you will add the vanilla in but you also want to make your tea flavored powdered sugar. For that you will need a spice grinder to make sure all your tea and sugar is blitzed until super fine. After that you add it to your cream cheese mix, mix it in well and your batter is ready to be poured into a lined spring-form pan over your base and bake it at 300F for about 25-30mins. The cake will still have a nice jiggle to it while hot, once it cools down it will actually set a little into a dense consistency.

For the base of your cheesecake you can use the traditional graham cracker & melted butter mix. I opted for a banana chocolate brownie bottom!! (For that recipe, keep your eyes out for my blog post dedicated especially to brownies)

I’m Dreaming of a Wine Christmas